I am a little late in writing this post as the Stanley Cup final was last week, but hey, what can you do?

I want to keep this post short but reiterate a couple things:

Throughout the series Vancouver dominated the Boston Bruins. Even during the several blowout games, Vancouver had a dominating presence and spent the majority of their time in the offensive zone. Vancouver’s lack of defence and inconsistent goaltender did not help the situation but Tim Thomas accounted for at least 90% of Vancouver’s failure and Boston’s success. 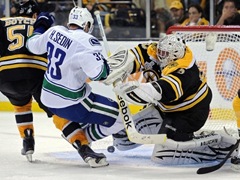 Beating the best team in the league (Vancouver won the President’s trophy) is no easy task but Tim Thomas made it look like child’s play. Vancouver won 3 games in the series but each time they won it was by the skin of their teeth. Vancouver had an obscene number of amazing chances to score but were turned away by what seemed like impossible goal-tending.

In the end, I don’t think Vancouver did a lot wrong. They dominated most of the games with offensive presence and created a huge number of picture-perfect scoring chances. In the end, they faced a brick-wall that covered every inch of the net.

I appreciate Thomas for his sensational skill but hate him oh-so-much at being the #1 (and basically, only) reason my team didn’t take the cup this year. Tim Thomas, I’m sorry but, to hell with you.

One thought on “The Boston Bruins Did Not Win the Stanley Cup. Tim Thomas Did”