For those with ADD, here is the short version:

Is PlayStation All-Stars good? Yes. It has it’s shortcomings but overall it is very fun to play, especially online. Many of the poor reviews I encountered online seemed overly harsh regarding it’s problems so I will try to clear up some things in the full review.

Now for the long version:

PlayStation All-Stars is Sony’s answer to Super Smash Bros., the wildly popular game originally released for the Nintento 64, featuring a number of iconic characters from the PlayStation franchise including Raiden from Metal Gear Solid, Drake from Uncharted, Kratos from God of War and many others (see photo below).

The gameplay is a lot of fun. I was worried that the controls would be unresponsive but was very glad to see that the game is very smooth and response times are minimal. It doesn’t feel as polished as Super Smash Bros., which was ridiculously slick, but it plays better than many fighting games — including Soul Calibur, in my opinion.

The graphics are very good, and although not as stunning as other major titles, are still impressive given the amount of on-screen action at any point in time. Each character seems to have received a lot of attention including voicing, art design with multiple costumes, signature moves and more.

One of the game’s greatest strengths, and simultaneously greatest weaknesses, is the number of specialized moves that exist for each character. You can expect 10+ unique moves for each character which offers a lot of diversity in the gameplay and overall offence and defence, but unfortunately it also creates a fair bit of complexity. Instead of being able to learn a general control scheme and switch around various characters, players are basically forced to master a select few. “Down + Square” might instigate a long range offensive attack with one character while initiating a short-range defensive attack for another.

It is hard to say if it is overall a pro or con but PlayStation All-Stars has definitely been designed to encourage extensive use of a single character through the use of a leveling system and unique moves. Trying out new characters for the first time can be frustrating but remains fun discovering each of their tricks.

Word of advice: do not play with Big Daddy from Bioshock. He has to be the hands-down worst fighter to use and seems to be completely absent from online play (in other words, everyone seems to agree he is not a good choice).

Stages are unique and well-though out with TONS of action. On some stages you will be more concerned about the environmental hazards then your opponents but you can always turn them off easily enough if they get in the way. Many reviewers complained about the story mode which is both short and received very little attention overall with simple voice-overs and little content. These criticisms are unfortunately, very accurate.

Overall though the game is great, and so far I have had a lot of fun. I recommend picking it up, if only for the fact that it lets you kick ass with your favourite PlayStation characters. 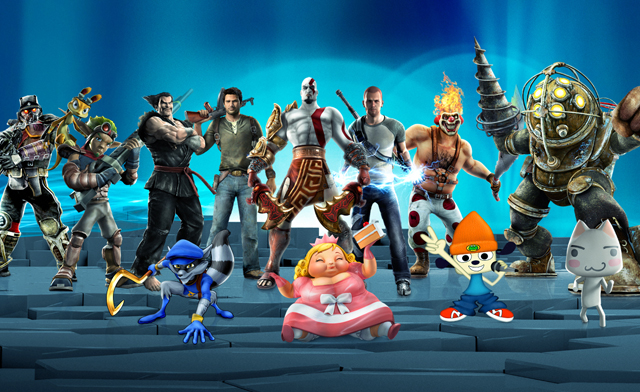