If you are anything like me, you have probably long wondered: where can you find the best climate in the world? The answer, after much research, is: The Canary Islands!

Some people, myself included, are not as lucky as others as far as climate stability is concerned. I live in Canada where our daily temperature can fluctuate by 15°C or more in any given season, and our winter and summer temperatures often differ by as much as 30-40°C. Of course, although us Canadians have to endure extreme temperature ranges, we do experience relatively few natural disasters, not to mention that Canada is the best country, period, so we can’t complain much. But I digress. 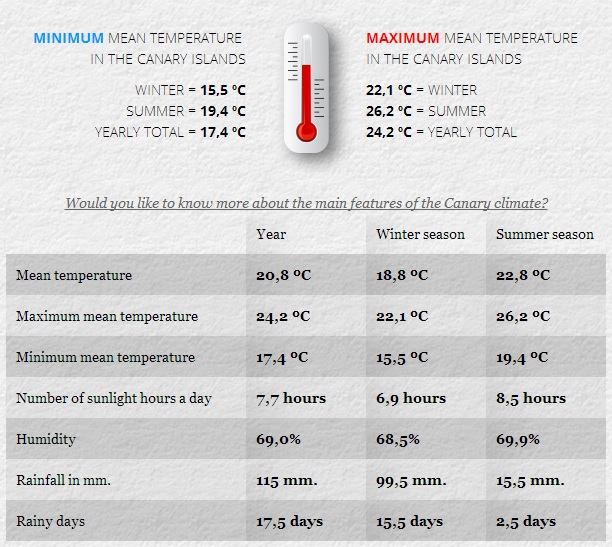 Fun fact: the Canary Islands did not get their name from canaries. Instead, the name comes from Latin “Canariae Insulae”, meaning “Island of the Dogs”. Weird, I know. It was known as Island of the Dogs because when it was discovered there were many large dogs found inhabiting the island.

Basically, the Canary Islands are warm year-round and rarely get scorching hot or freezing cold. I find it particularly crazy that the average temperature there in the winter is a very typical Canadian summer low.

So there you have it. What you do with this information is up to you.

Runners up for best climate in the world:

2 thoughts on “Best Climate in the World: The Canary Islands”