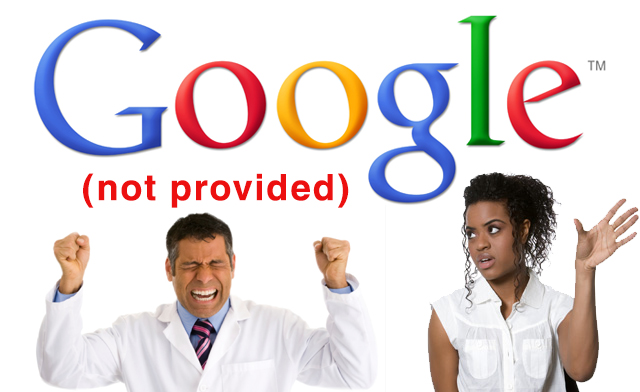 Google continues to make changes that improves their products’ user experience, but that hurts their primary customers, those that actually give them money — namely, marketers. With each new iteration of its core products, Google has made one thing clear: Online marketers, you are priority #2.

Back in Oct 2011, Google enabled encrypted search for users logged into their Google account. This caused a large portion of queries to show up in analytics as “not provided”, greatly reducing the visibility of search data useful for marketing analysis. This change had dramatic implications for online marketers, inbound marketers and especially SEOs. The change had many people up in arms.

What is interesting is that despite the blow-back, Google did nothing to make their customers feel better about the situation. Considering 96% of Google’s revenue comes from advertising, you would think they would try harder to keep the marketers happy.

The next thing Google did was even more radical. A recent Gmail update pushed out a new interface with several tabs that automatically sorts a user’s email and separates all marketing and promotional emails out of their inbox into a new Promotions tab. This change is particularly extreme because newsletters and other content a user subscribes to is now sent to the promotions tab so the email is no longer front and center in their inbox.

It is very bizarre that Google is continuing to make changes that frustrates their customer base. These user “improvements” are rarely directly requested and yet heavily impact marketers. Perhaps Google is too big to fail? They certainly have such a high percentage of search traffic that marketers are pretty much stuck with them whether they like it or not.

Have you been affected by these Google changes? Please share your experience in the comments below.

I am a frequent moviegoer, seeing over 52 movies a year with a passion for almost all genres except “Chick Flicks”. Unlike my unwavering love for movies, however, my love for Cineplex has been a roller coaster ride of ups and downs recently.

I wrote previously about the not-so sneaky introduction of advertising in TimePlay, and later wrote about how they fixed the situation by removing the ridiculous advertising and made TimePlay awesome. However, they have recently taken a step back by introducing heavy advertising before the movie begins. I realize that movie theaters probably aren’t doing so well these days with piracy rates going up but by introducing too many advertisements before the movies, they risk alienating what audience they have left and stressing relationships with loyal customers like myself.

As far back as I can remember theaters had advertisements before the movies but Cineplex has recently taken it to a whole new level – some movies starting with up to 12 advertisements! Going to the movies isn’t cheap. People will begin to get very upset with the fact that they’re paying top dollar to see movies when they’re released only to be bombarded by more advertisements than watching movies any other way. So now the options are to see the movie in a theater while watching an abundance of advertisements, or download the movie in the comfort of your home and have no advertisements. Which option do you think will be more popular?

What makes the situation even more insane, is the fact that movie previews are already built in advertisements. So not only do you spend several minutes watching ads for other movies but you must also spend many more minutes being spammed over and over again with additional ads. And don’t even get me started about the annoyance of seeing the same ads over and over — made excruciating because of how frequently I go to the movies. It was a slight annoyance before when there were only a couple ads for each movie but now the number of ads has become intolerable.

The worst situation was when I went to see The Hobbit recently. My fiancée and I actually counted the number of ads and we got to 12 – give or take, we somewhat lost count. We just sat there in astonishment as ad was followed by ad for what seemed like an eternity. Since then we saw one more movie and although there were fewer ads, there were still way more than in the past (probably double).

Cineplex, I want to love you like I used to but you’re making it very hard right now. We may have to see different people. It’s not me, it’s you.