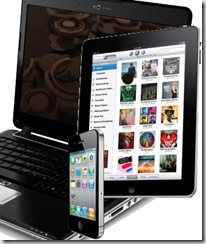 I recently made an appearance on The Digital Marketing Lounge to discuss with Shum the benefits of using tablets as well as to discuss the future of tablets and some specific models as well. Check out the full podcast.

Personally, I do not quite understand the popularity of tablets. I think that a lot of the movement of the market can be explained not by the perceived benefits of the devices but rather the fact that they are “new”, “cool” and “interesting”. With all of the hype going around, it is easy to see how consumers could easily be roped-in to pick one up.

The reason I say this is because I see hardly any benefits of owning a tablet vs. other technology most people probably already have. Let’s look at the tangible benefits of existing technology and compare it with tablets.